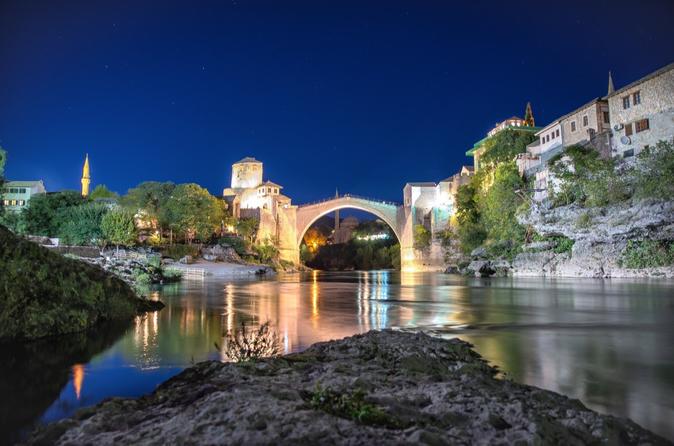 Day 1: Pick up from Sarajevo Airport to the hotel. Baščaršija - Old Town – is the historical and cultural centre of the city. Visiting the main historical monuments, like the reconstructed City Hall of Bosnia and Herzegovina, Latin Bridge, Emperor’s Mosque, Kazandžiluk street (Coppersmith's street) and the Gazi-Husrev Bey’s complex.
Returning to the hotel and overnight stay at Sarajevo.

Day 2: After breakfast departure to Herzegovina. Visit Tunnel of Hoppe. The city of Sarajevo was  under the siege for 4 years, from  1992 to 1996. This is the longest siege of a city in modern warfare. The aggressors were the Army of Republika Srpska. The Tunnel of Hope was built in 1993. It was a secret project of the Bosnian Army. The project code name was “Objekt BD”. The goal was to connect two of the nearby neighbourhoods. Dobrinja, occupied by the aggressors and Butmir under the command of the United nations. Continiue to Konjic,
refreshments at the six-arched Stone bridge built in 1682.  Overnight stay in Mostar.


Day 3: Herzegovina tour, Visit to the medieval town Počitelj, a unique place in Bosnia despite the many fortresses that are available. Poćitelj is a stone city that is still inhabited. Visit to the Kravice waterfalls.
After Kravica waterfalls visiting River Buna with a view of historic Dervish House. Lunch in the restaurant „MLINICA“ on the side of river Buna in unique environment. After breakfast, sightseeing of Mostar with all its beauties and famous tourist spots. Visit to the famous Old Bridge, one of top ten most beautiful bridges in the world. It was once compared with a 'rainbow rising up to the Milky Way' and was included in the United Nations list of worldwide cultural heritage. The Old Bridge stood for 427 years, until it was destroyed on 9 November 1993 by Croat forces during Bosnian War. The Old Bridge was completed in 2004, almost 11 years after its destruction, using some of its original pieces recovered from the Neretva river.
During our tour, you will be able to attend the projection of the 15-minute film about Mostar.  Overnight stay in Mostar.