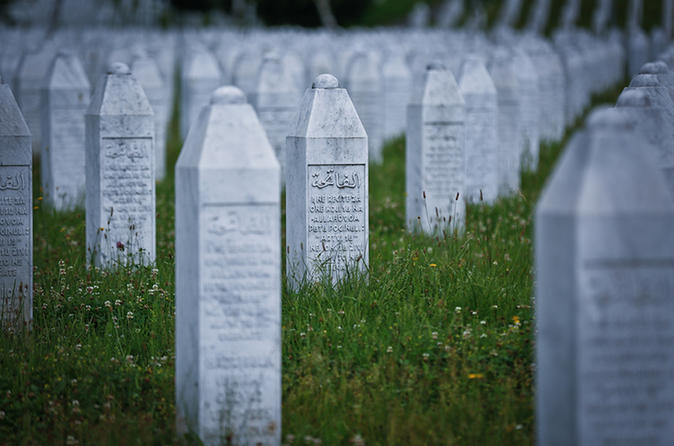 This day tour from Sarajevo to understand the genocide of Srebrenica 11th July 1995, is unique, factual and storytelling experience. It has been created for anyone interested to learn more about these unfortunate events which took place in region of Eastern Bosnia, called Podrinje, during July 1995. We invite you to join us, learn more, and help us break the prejudice about Srebrenica Genocide.

After the morning pickup around 8 am, you'll spend two and a half hours on the road towards Srebrenica, where you’ll enjoy the beautiful scenery of Eastern Bosnian mountain regions, spiced up with detailed stories and important explanations behind the reasons of "Death of Yugoslavia". Understanding the role of Bosnia in the storm of 90's is crucial for better understanding of Genocide in Srebrenica.

Genocide in Srebrenica is not an event which just took place in one narrow region or one town, in fact, it is an overall story of aggression on Bosnia and Herzegovina, meaning Genocide events took place in wider area of Bosnia and Herzegovina, and especially of the region of East Bosnia. During your ride you will pass through several small towns and village where similar events have occurred, so chronological introduction and context is very important to fully understand the story that you'll be exploring together that day.

As soon you arrive to Memorial Centre at Potočari, you will have a chance to participate at locally guided tour and history class at Memorial Centre with official guide. Local guide in charge is survivor of those events and person whose experiences and stories are extremely important part of the tour.

Memorial Cemetery where over 6500 people, in past years have been buried, before exhumed and identified, while some over 1500 victims are still missing, will be the most striking and mind blowing part of the visit. Other important elements of the visit will take place at former Dutchbat UN base, where you’ll get a chance to see amazing newly open (Feb 2017) Museum of "Srebrenica Genocide - failure of international community", understand importance of Memorial Room, see number of documentary movies, study chronological photo exhibitions, get stunned by graffiti remains, learn personal stories and stories of in-base mass grave and other elements of importance related to overall story of Srebrenica Genocide.

After some three hours of visiting Potočari Memorial Centre, it's time for a short, 6 km ride to Srebrenica town. Visiting this small, historically rich, ‘silver town’ (Bosnian for silver is ‘Srebro’) will give better insight in the meaning of the “Worlds largest concentration camp during the 90's”.

Once in Srebrenica, it'll be time to stop for lunch (not included) where you will receive further elaboration about present life, as well as have a chance to explore the place on your own too.

After you are done with lunch and city explorations, it is time to head back. Expect to be in Sarajevo around 6 or latest 7 pm.

Finally today, facts are known, as what exactly happened in Srebrenica is beyond any reasonable doubt, simply numerous trials at ICTY have proven it, but true reasons and role of the Dutchbat UN forces at Srebrenica, and overall UN role, is very hard to fully uncover. The mission of this tour is to clear it out.

This day tour from Sarajevo to understand the genocide of Srebrenica 11th July 1995, is unique, factual and storytelling experience. It has been created for anyone interested to learn more about these unfortunate events which took place in region of Eastern Bosnia, called Podrinje, during July 1995. We invite you to join us, learn more, and help us break the prejudice about Srebrenica Genocide.